This page shows the River’s proximity to our Basecamp and Redemption, Exploration, and Reflection Cabins.  Also explored is the River’s origin, course of travel, history, and wealth for heath and recreation.

First you’ll see short seasonal clips of the River as it flows past Basecamp during Spring, Summer, Fall and Winter.  Then, the rest of the story.

[Only the Summer video will be shown if you’re not viewing on a desktop]. 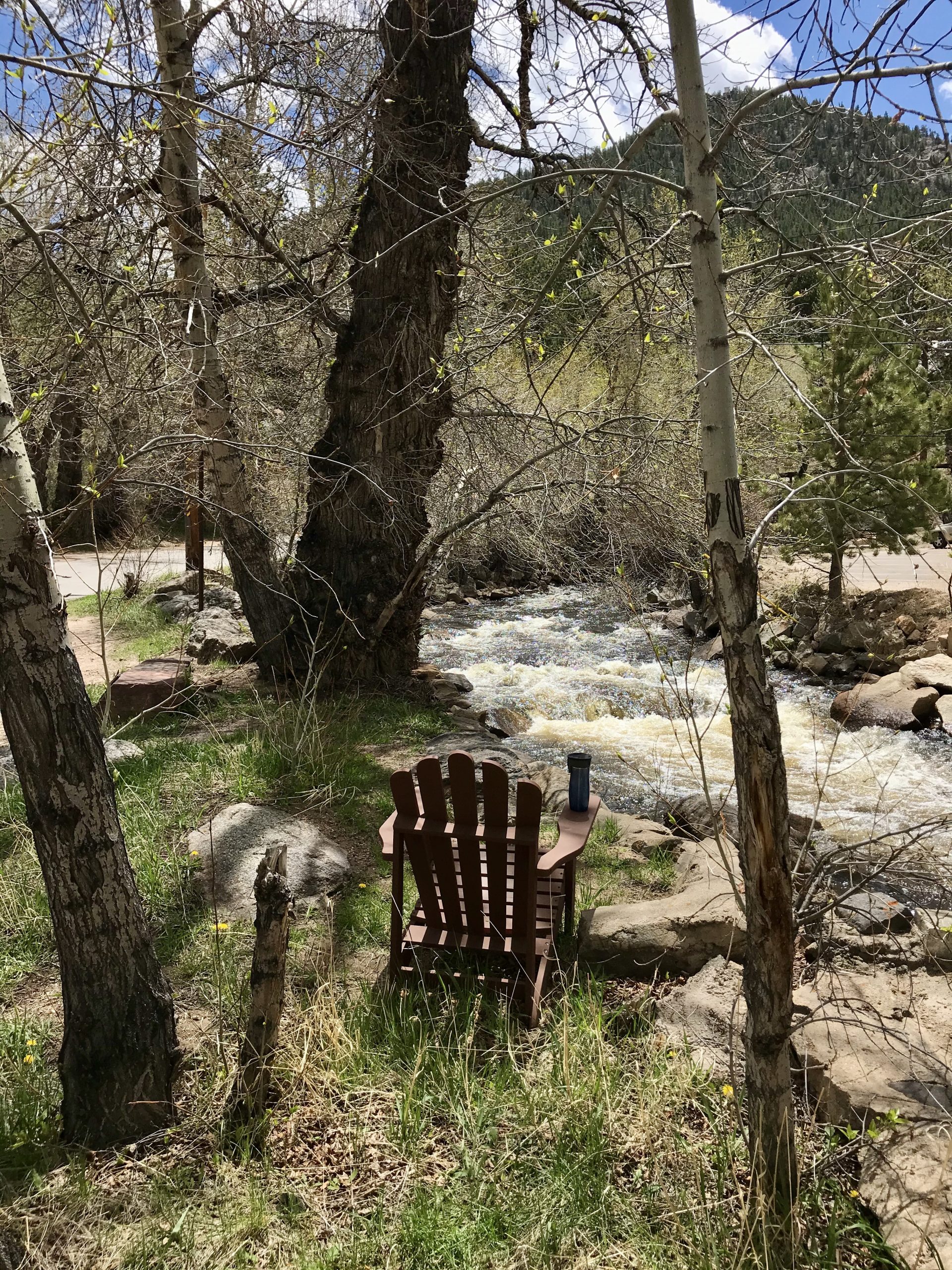 The headwaters of the Big Thompson River begin in Forest Canyon high up within Rocky Mountain National Park. The river meanders east through RMNP’s Moraine Park down to the town of Estes Park and through the Big Thompson Canyon later to form a tributary of the South Platte River.

Just before approaching Basecamp, Southside Downtown, the River makes a 270 degree hairpin turn north to Historic Downtown, passing open banks, This Mountain Life Cabins, and Baldwin Park along its way. On the first photo below, the orange diamond marks our spot.

A few minutes later, at Confluence Park, it bends back East and together with Fall River gives shape to our wondrous Riverwalk. 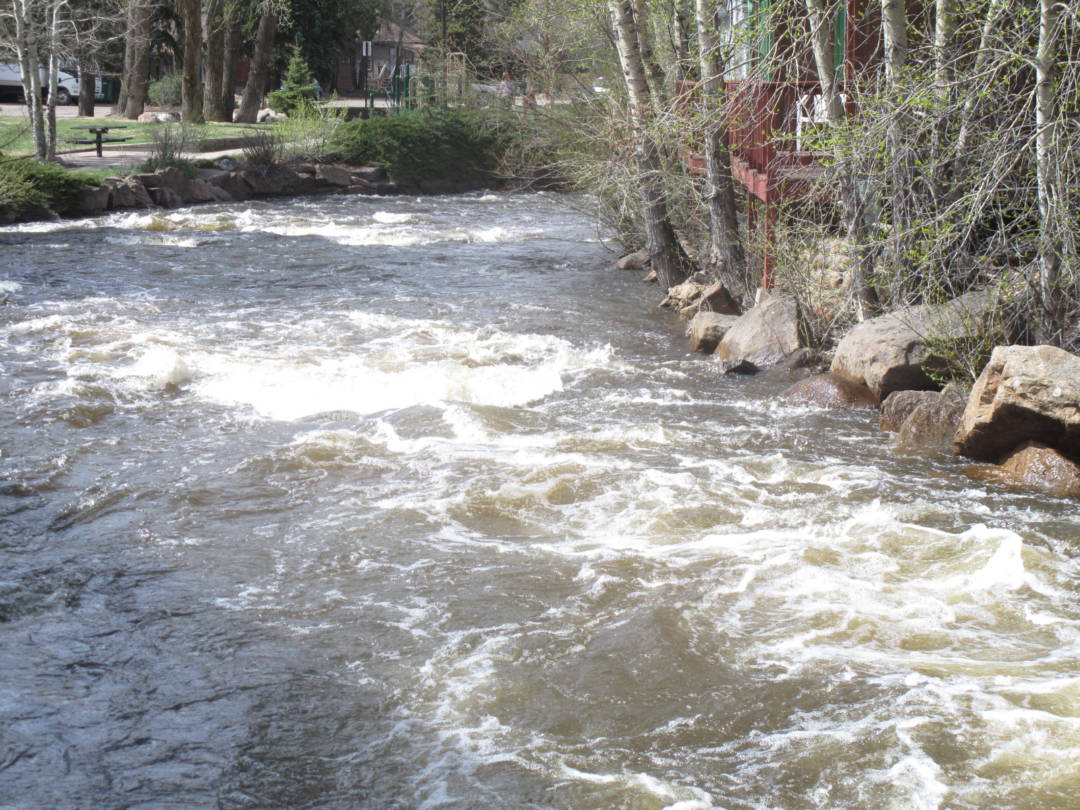 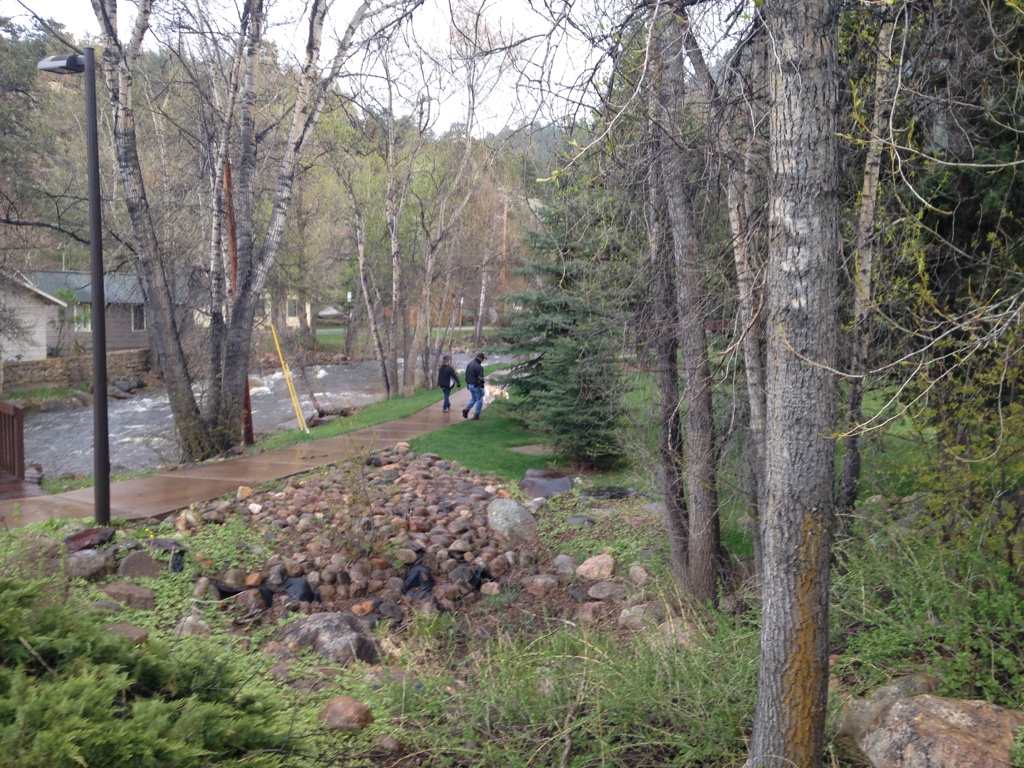 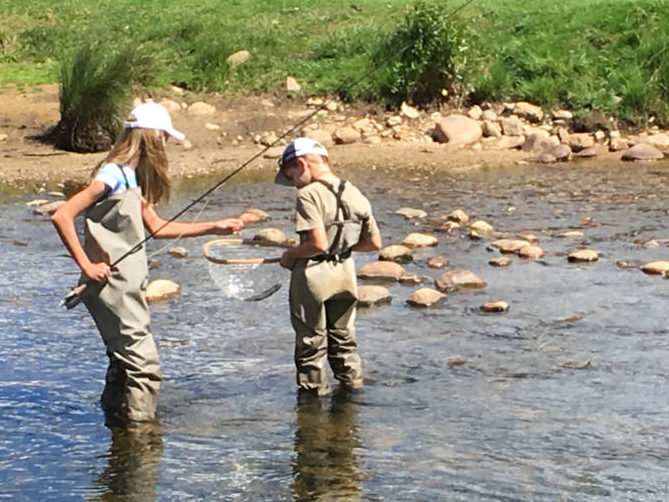 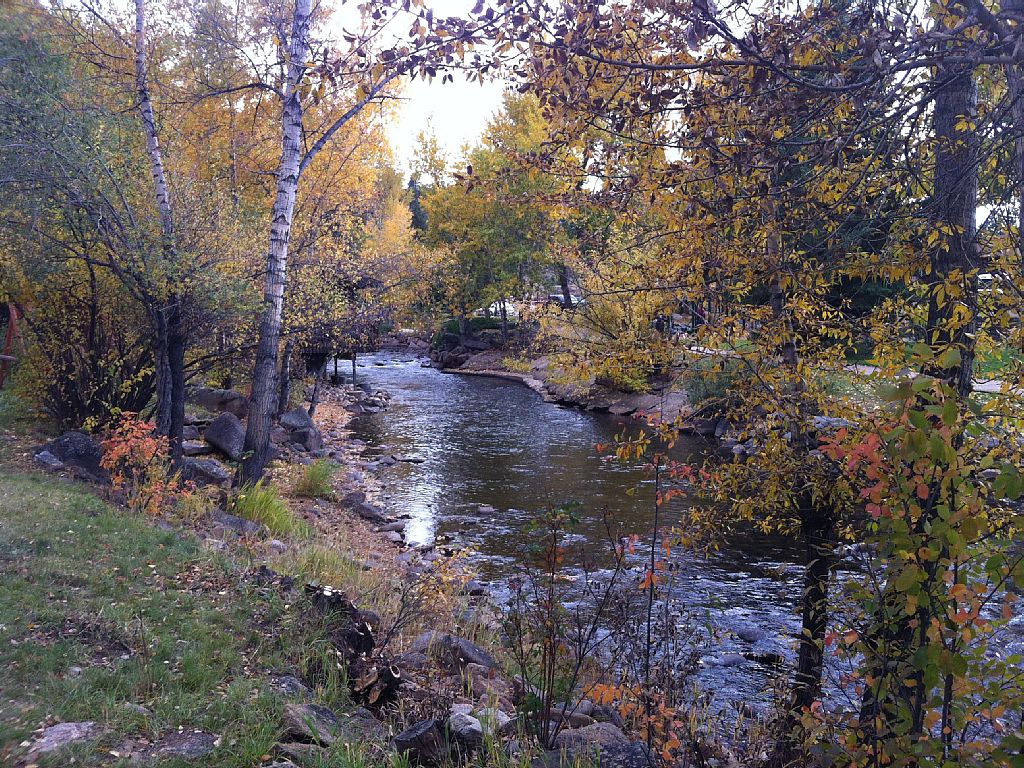 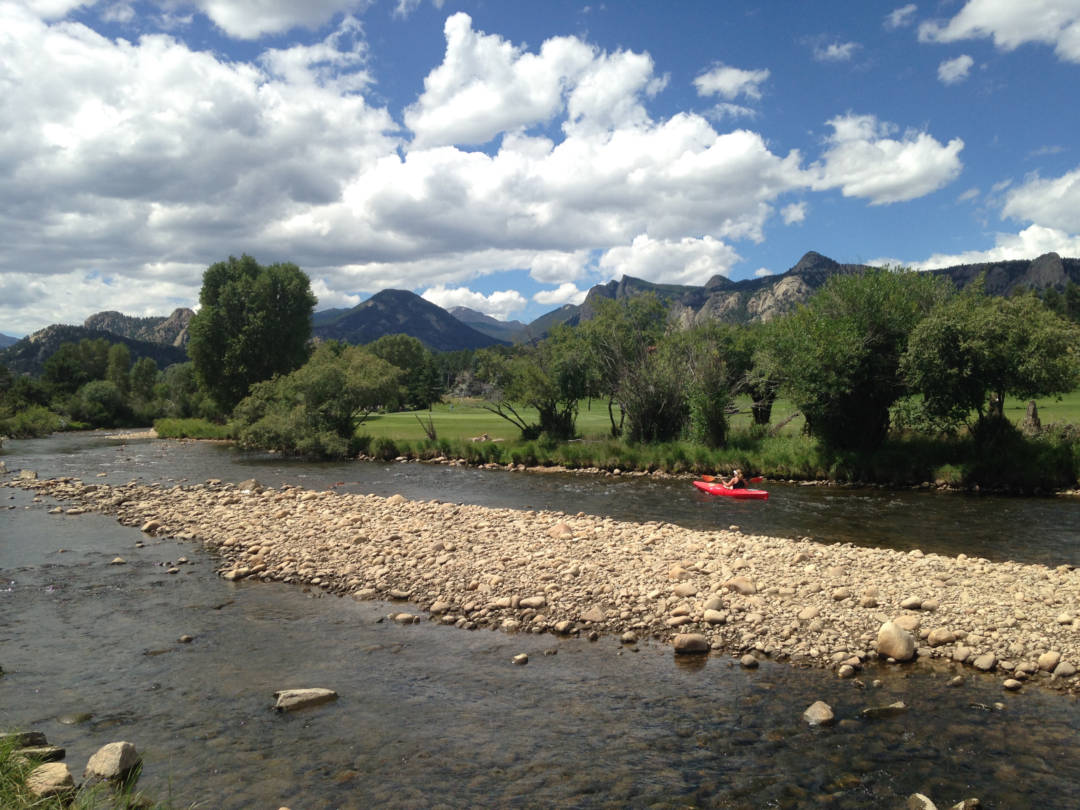 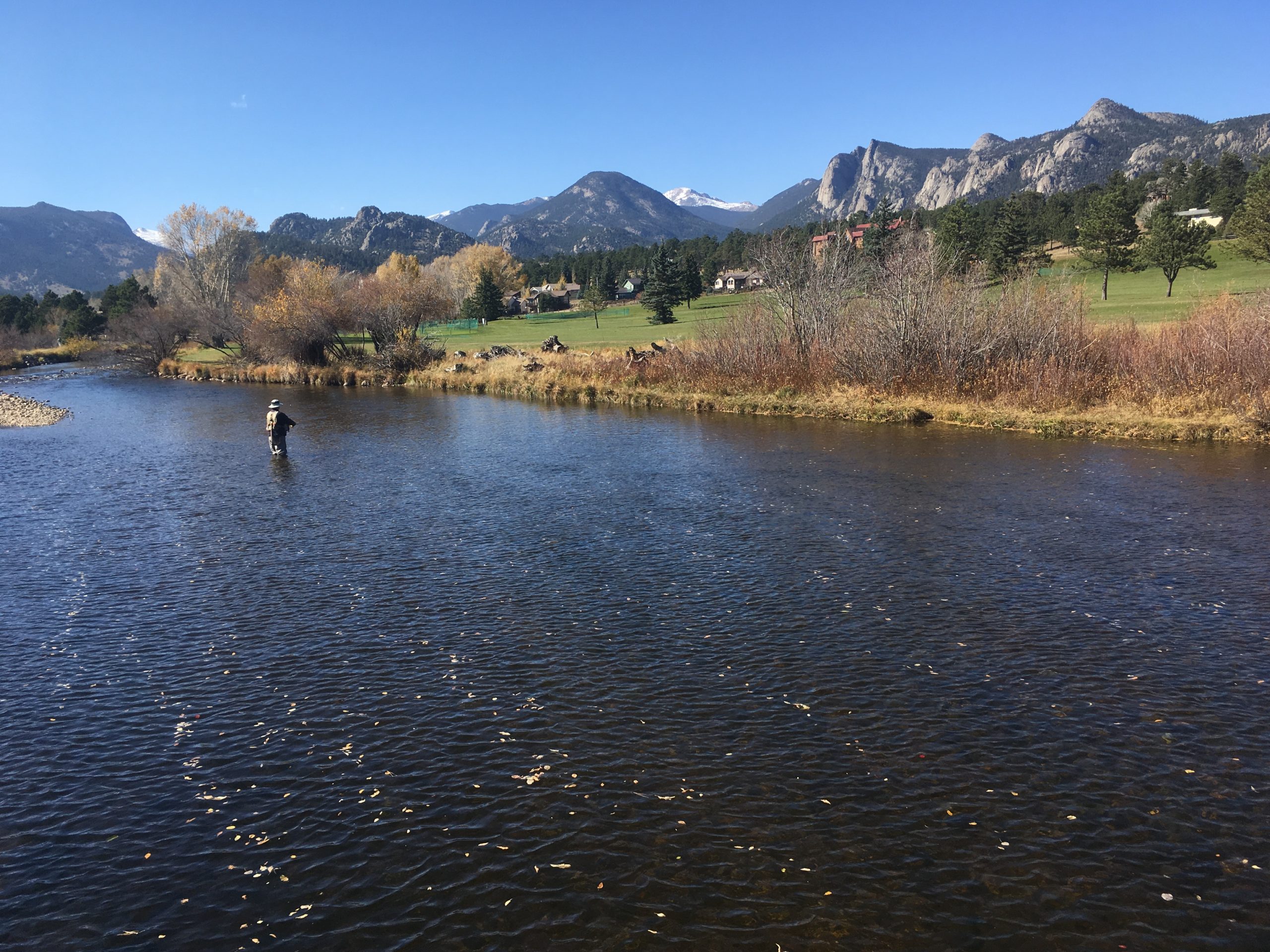 About one-half mile further downstream, their combined waters empy into Lake Estes and are held by the Olympus Dam before being released down the Big Thompson Canyon. 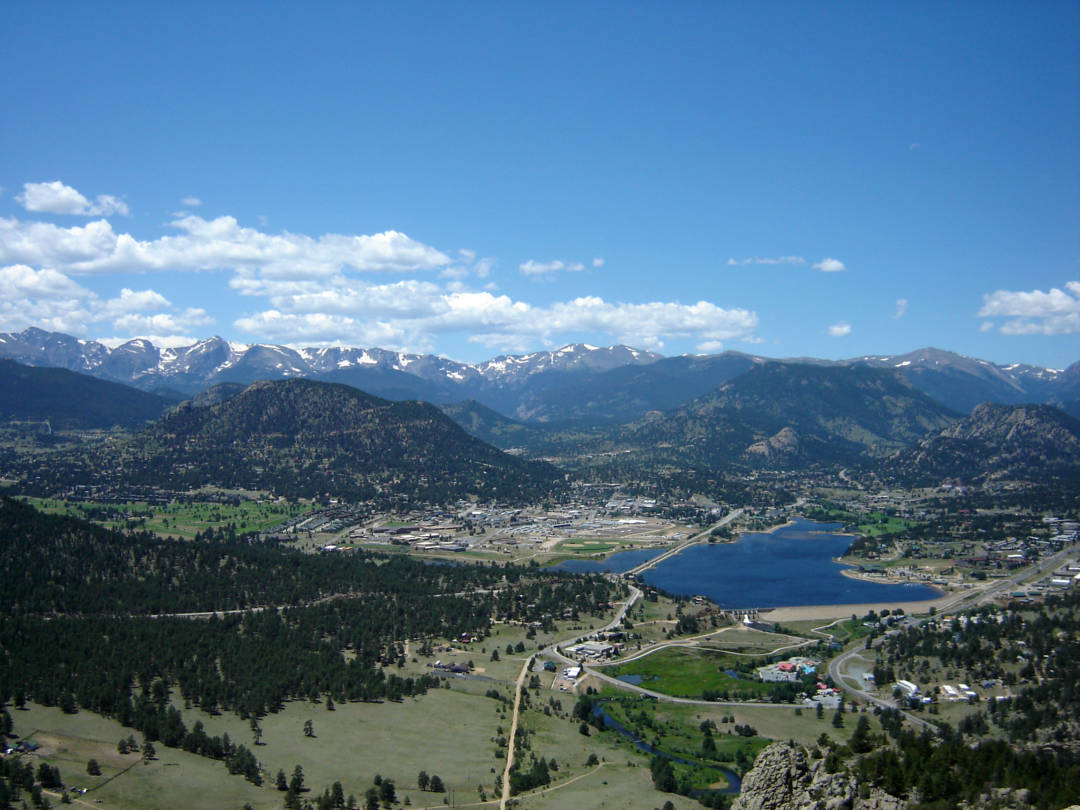 From Lake Estes, the River descends one-half mile in elevation through the mountains in the spectacular 25 mile white water ride.  It emerges from the foothills on Highway 34 west of Loveland. Then it flows eastward across the plains into Weld County and joins the South Platte approximately 5 miles south of Greeley.

Big Thompson Canyon Flood of 1976.    On July 31, 1976, during the celebration of Colorado’s centennial, the Big Thompson Canyon was the site of a devastating flash flood that swept down the steep and narrow canyon, claiming the lives of 143 people, 5 of whom were never found. This flood was triggered by a nearly stationary thunderstorm near the upper section of the canyon that dumped 12 inches of rain in less than 4 hours.   Little rain fell over the lower section of the canyon, where many of the victims were.

This flood was more than 4 times as strong as any in the 112-year record available in 1976, with a discharge of 1,000 cubic meters per second.  See, Wikipedia.

Fall River Flood of 1982.  Lawn Lake Dam was an earthen dam in Rocky Mountain National Park that failed on July 15, 1982 at about 6 a.m. It is known as the flood of 1982. The sudden release of 30 million cubic foot of water resulted in a flash flood that killed three people camping in the park and caused $31 million in damage to the town of Estes Park, Colorado and other downstream areas.

Lawn Lake was originally a natural lake with a surface area of 16.4 acre, located at an altitude of approximately 11,000 feet in the Rocky Mountains.   In 1903 a group of farmers from Loveland built a dam to increase it to a surface area of 48 acres for the purpose of providing water for irrigation in Loveland.

Over the years the road that had been cut to permit construction of the dam fell into disrepair and ceased to exist.   Because of the dam’s remote and difficult location, inspection and repairs lapsed. The Colorado State Engineer determined that the probable cause of the dam failure was deterioration of lead caulking on the joint between the outlet pipe and the gate valve leading to internal erosion of the earth-fill dam.

When the dam failed the waters rushed down the Roaring River valley, which falls 2,500 feet in 6 miles, at a peak rate of 18,000 cubic feet per second, scouring a large gully out of the mountain stream and killing one person camping alongside it.   At this rate, the lake emptied in about a minute.  When the waters reached the broader valley of Fall River at Horseshoe Park they spread out and slowed down, leaving behind a large alluvial fan of debris. The flood continued down Fall River and hit the Cascade Dam which stored water to run a hydroelectric plant about a mile downstream. Cascade Dam failed from the onslaught and added its waters to the flood. The Aspenglen campground was destroyed and two campers who returned to recover camping gear lost their lives, although rangers had been able to give advance warning. The flood entered the town of Estes Park and caused severe damage to the downtown shops.   In Estes Park the flood joined the Big Thompson River and flowed into Lake Estes on the eastern edge of the city. Olympus Dam, part of the Colorado-Big Thompson Project, there withstood the deluge and the flood was halted.

The scar left by the scouring of Roaring River and the alluvial fan at Horseshoe Park are still very apparent 30 years later and will remain for a very long time. Twenty-five years after the accident, the extent of the former reservoir is still clearly evident, and at the mouth of the lake, the start of the Roaring River flows through the location of the former dam.

We were there!  We survived!  Full report to come.

Are the Mountains calling?

Click to ask Questions, get an Instant Quote or Book Now